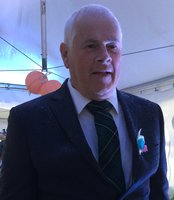 John Francis MacLean (63) passed away peacefully May 30 th , 2020 at Northern Lights Hospital, Fort McMurray, Alberta with his family by his side. John was born in New Glasgow, Nova Scotia. He was the son of Patricia Maclean and the late John (Jack) MacLean. John is survived by his beloved wife of 36 years Elsie (Anderson), children Lowell (Janet Logan), Leslie (Patrick MaCaulay), Allie (Tyler MacDonald), Amanda (Ritchard English) and his five precious grandchildren Sawyer, Sophie, Ainslie, Bo,and Charlie. Mother Patricia MacLean, sisters Karen (Paul Kerr), Susan (Don Breen), Brenda (Nick Rodinos). He will be greatly missed by his many nieces, nephews, aunts, uncles, cousins, and friends. John grew up a proud North Ender and had forged many friendships through his love of music and sports. John shared a love of The Montreal Canadiens with his father Jack and passed that on to his own children. John loved working with wood and crafted his own electric guitars, inspired by some of his favourite rock legends. John had a “Die Hard” attitude and kept positive through his final years. John was generous, loving, and always kept a smile on his face, even through difficult times. He loved spending time at the family cottage in Nova Scotia. He cherished the time he got to spend with his grandchildren, driving them around to enjoy the local scenery, taking them for walks, and sneaking them the occasional treat. A Celebration of Life will be held at a later date. Donations can be made to the Northern Lights Regional Health Centre, Palliative Care Unit, or a charity of ones choice.