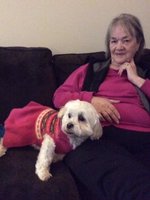 Marina Elizabeth Bell England Barrett passed away on November 3, 2019. She was born in Smith’s Harbour, Newfoundland on February 16, 1942. Marina met Edward Barrett when she was 15 years old. They were very fond of each other and fell in love. They married on May 27,1958. They were married for over 62 years. During their years of marriage, they raised six children (Karen, Sharon, Tina, Eddie, John and Michelle). They have nine grandchildren (Gordon, Levi, Charmaine, Brandon, Dustin, Albert, Coale, Aly and Marisa). They also have four great-grandchildren (Ethan, Alexis, Brandon and Sloane). In lieu of flowers, donations can be made to a charity of choice.