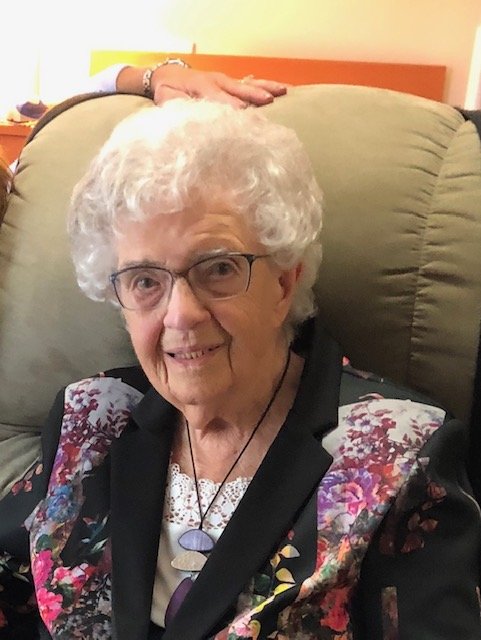 Please share a memory of Nellie to include in a keepsake book for family and friends.
View Tribute Book
Sadly, we announce the passing of Nellie Myrtle King(Feltham), on Nov. 8, 2020, at the age of 102, in Fort McMurray, Alberta. Hers was a life lived graciously. Thoughtful, witty, charming, and impeccably polite, she touched many lives. She leaves us with many wonderful memories, her words of wisdom, and lots of smiles and laughter. Myrtle, as she was known by family and friends, is survived by her daughter Barbara Brown and husband Bradley of Fort McMurray, daughter-in-law Marjorie King of Cambridge NS, sister Eloise Martin of Clarenville NL, beloved grandchildren Adrienne King (Jon Seary) of St. Phillips NL and Taylor Brown (Wendy Wong) of Edmonton AB, four cherished great grandchildren, beloved nieces and nephews, Elizabeth Andrieux (Jean-Pierre), Wayne King (Linda), Janice King (Glenn Coates), Paul Martin (Robin), Denise Martin, and special friends Sadie Thistle, Betty King, and Brenda Lacroix. Myrtle was predeceased by her husband William R. King, son James, great grandson Matthew Seary, sister Bessie Thistle, and brothers-in-law George Thistle and George Martin. Myrtle, was born in 1918 to Martin and Annie Feltham at Deer Island, NL. When Myrtle was almost a year old, she and Annie moved to Broad Cove to be near family. They moved while Martin was working in New York City as an ironworker with the crew that finished the top of the Empire State Building. Myrtle became a teacher and started her career in one room school houses from Bauline to Carmanville to Port aux Basques, before returning to teach in Broad Cove. It’s here she married William Reginald King, who ran the family general store. They started their family with the birth of son, James in 1946. Shortly after, they moved to Corner Brook and the family expanded with the birth of daughter, Barbara. The family moved one final time in 1964 to St Johns, where Myrtle worked for several years as the switchboard supervisor at the Janeway Children’s Hospital. Myrtle and Bill developed a wide circle of friends and entertained frequently. She loved to cook and try new recipes and ever the gracious hostess, took pleasure in seeing others enjoy the fruits of her labour. All guests were warmly greeted with a pot of tea and plates full of delicious baked goods. She had a regal quality that she successfully paired with the ability to put everyone in her company at ease. Her attention to proper etiquette was based in the desire to be courteous and considerate to others. Myrtle was a wonderful host and guest. She could talk about all kinds of subjects from world events to baseball. She was funny and genuinely interested in what others were up to. She was elegant and always dressed impeccably. Myrtle had a knack for wearing the perfect outfit for the occasion, and she had the most gorgeous hair, which she kept perfectly styled. She was classically beautiful, and it underscored her stately manner. In 1995 Myrtle joined Barbara and family in Crowsnest Pass AB, eventually moving to Fort McMurray in 2002. Underneath the charming and engaging personality was a strong and steely will to be reckoned with. Myrtle survived the loss of her husband and son. She lived through the Fort McMurray fire of 2016 and its aftermath, which saw Barbara’s family losing their home, and a lengthy illness resulting in a five-month hospital stay. Her life was bookended by two global pandemics. Yet, she bore everything out with stoicism and dignity. She truly seemed invincible. She gained wisdom from her life experiences, and anyone who spent time around her will remember hearing at least a few of her sayings. Some were prefaced with “That’s like the old woman who…” Some stood on their own such as “When you would do good, evil is ever present.” If someone was acting up and difficult to calm down, you might hear, “You’re galling for weather.” All of her family have at least one that will pop into their heads regularly. If they are lucky, her beautiful alto voice will be saying it. The last place Myrtle called home was Rotary House Seniors Lodge. She moved to this lovely place in Fort McMurray in 2010, and developed many close friendships amongst the residents. She fully embraced life there, was a regular at exercise class, and enjoyed socializing. Myrtle loved the fantastic, caring staff, whom she considered her extended family. Thank you to the front line healthcare staff at the NLRHC in Fort McMurray for providing exceptional care in her last weeks of life as well as Home Care in the last several years. Thanks to Dr. Loretta Roberts and staff, who were very special to Myrtle and provided years of exceptional care. Cremation has taken place, a funeral and internment will be held in St Johns NL in 2021. In lieu of flowers, friends and family may choose to donate to a children’s hospital, Rotary House Seniors Lodge (10116 Fraser Ave, Fort McMurray, AB T9H 5E9) or a charity of one’s choice. Condolences can be made at rafuneralservices.com.

A Memorial Tree was planted for Nellie
We are deeply sorry for your loss ~ the staff at Robert Anderson Funeral Service, Inc.
Join in honoring their life - plant a memorial tree
Online Memory & Photo Sharing Event
Online Event
About this Event

Look inside to read what others have shared
Family and friends are coming together online to create a special keepsake. Every memory left on the online obituary will be automatically included in this book.
View Tribute Book
Services for Nellie King
There are no events scheduled. You can still show your support by planting a tree in memory of Nellie King.
Plant a tree in memory of Nellie

Share Your Memory of
Nellie
Upload Your Memory View All Memories
Be the first to upload a memory!
Share A Memory
Plant a Tree