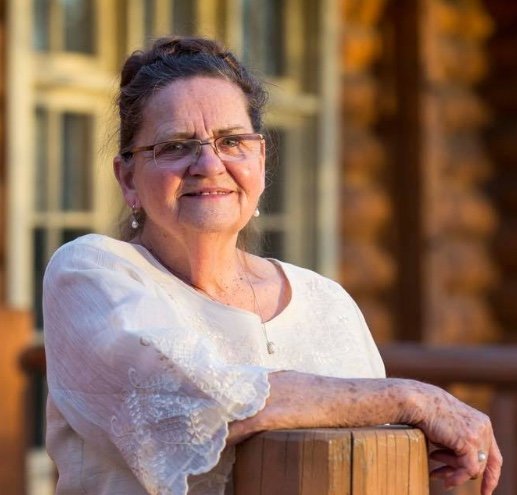 Frances Jean was a trail blazer, an astute business woman, an historian, author, and fearless ambassador for Fort McMurray, Alberta and Canada. She was the beloved matriarch of her family and was held in high esteem by all who knew her, affectionately known as “Mrs. Jean”.

Frances was born at the family orchard in Westbank, British Columbia on February 5, 1932 and often returned to visit family there. In 1967, she and her late husband Bernard moved to Fort McMurray where they raised their family and became pioneers of the community.

In 1968, Frances and Bernard opened Jean’s Gifts and Stationary on Franklin Avenue and started the first newspaper in Fort McMurray, the McMurray Courier, where she acted as reporter, writer and editor. Copies of this paper are currently held in the National Archives in Ottawa. Many will also remember the magazine she wrote, Focus on Fort McMurray, copies of which are kept at Heritage Park.

Many people recall the wonder of the gift store and the personalized service she provided. Over the years, Frances owned and operated over a dozen successful businesses, most recently partnering with one of her sons in 2001 to create City Centre Group Inc., a successful corporation with commercial property, holiday rentals and a busy car wash. This year marked her 50th year as a Fort McMurray businesswoman. Mrs. Jean will go down in local history as being the first woman allowed to be a director of the Fort McMurray Chamber of Commerce after she wrote a scathing editorial in her paper about sexism and merit. Although never elected to public office, she was a powerful force at every level of government. Locally, she was a director on the Downtown Business Association, a director on the Fort McMurray Airport Authority, a member of the Municipal Street Naming Committee, a director on the Fort McMurray Historical Society, an advocate and community member for the Salvation Army Homeless Shelter, was a Keyano College Distinguished citizen, and a Woman of Inspiration for Girls Inc. She was a vigorous advocate for the Fort McMurray long-term care facility at Willow Square, and in 2005, initiated a government petition to twin Highway 63, funding for which was announced federally and provincially in 2006. In addition to all this, she was appointed to various provincial and federal boards, volunteered thousands of hours on numerous non-profit boards and received countless awards and accolades from all levels of government and business. She loved northern Alberta and loved to be on the Clearwater river with her family. She often went by canoe, and later by jetboat, on long trips up to Whitemud Falls and up the Athabasca to the Northwest Territories. She loved to read the children stories of the early explorers around the campfire and relished time spent up her son’s cabin on the river. To celebrate her 80th birthday in 2012, in her typical style, she launched her 327-page book, "More than Oil: Trappers, Traders & Settlers of Northern Alberta". Truly a legacy. Apart from spending time in her garden, one of Frances’ other great pleasures was to travel and explore the history of the world. One of many travel highlights was her visit to Buckingham Palace where she attended a garden party hosted by Her Majesty Queen Elizabeth. As a fervent royalist, she was always excited when telling of her brief conversation with the Queen herself! She loved to travel with her children and with charities that she supported. She had travelled to over 150 different places and every continent.

A strong but humble Christian, she read her bible faithfully every morning and over the years quietly donated millions of dollars to Christian charities. She believed that true happiness could only be found in doing things for others. She also believed that regular meals, regular sleep and regular work led to a happy and successful life. Frances worked full-time in her business up until her passing.

She is survived by her children Mark, Philip, Evelyn and Brian and step-children Mary, Charles, Lawrence, Blair, Guy and sister Isabelle. She has been blessed with scores of grandchildren & greatgrandchildren who will remember her fondly. Frances was adored by her family for her love, kindness, patience, firm honesty and of course, her weekly home-made bread, scones and jam. May she receive her crown in heaven when she reaches the golden gates, where loved ones await her. We love you Mrs. Jean, Frances, Mom, Auntie, Grandma, friend… and will always remember you and the beautiful legacy you leave.

Share Your Memory of
Frances
Upload Your Memory View All Memories
Be the first to upload a memory!
Share A Memory
Plant a Tree