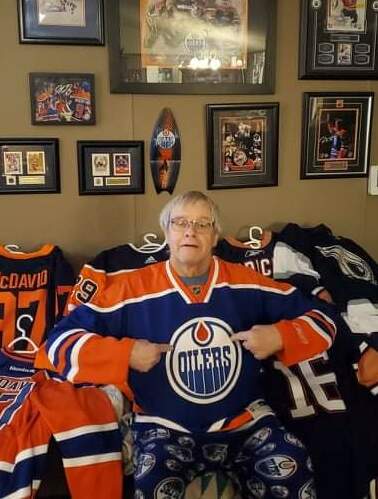 Please share a memory of Jan to include in a keepsake book for family and friends.
View Tribute Book
It is with great sadness we announce the passing of Jan Joseph Tollenaar on Jan 20, 2022, at the Northern Lights Regional Health Centre at the age of 69. Joe was born in Elst, Utrecht, Netherlands. Joe will be greatly missed and forever remembered by his wife of 40 years, Shirley; Children: Jessica, Pieter, Cassandra-Lynn, step-daughter Carey (Gary); grandchildren; Riddic, Riley, Everette, Lakelynn. As well as his mother Teuntje; brothers and sister; Reyer (Deanna), Nora (Reg), Martin, and Randy (Judy). Father-in-law William Chauncey; Sister and Brother-in-laws Barton (Trudy), Beverly Achilles, Melvin (Cheryl), Larry (Susie) June (Ron), Debbie and Ken; as well as numerous nieces and nephews. He is predeceased by his father Pieter Adrianus Tollenaar, mother-in-law Alice Chauncey, Brother Herman, and Herman's wife Karen. Brother-in-law Gordon Chauncey, and sister-in-law Donna Petterson. Joe's greatest joy in life was his family and friends, but especially his grandchildren. He would not want us to be sad for long but instead remember all the joys, laughs, and memories shared. Plans for a Celebration of Life will be held at a later date. Donations in memory of Joe Tollenaar can be made to the Northern Lights Regional Health Centre. The family would like to extend their appreciation and gratitude to the nurses and staff at the Northern Lights Regional Health Centre for their care and kindness to Joe.

A Memorial Tree was planted for Jan
We are deeply sorry for your loss ~ the staff at Robert Anderson Funeral Service, Inc.
Join in honoring their life - plant a memorial tree
Online Memory & Photo Sharing Event
Online Event
About this Event

Look inside to read what others have shared
Family and friends are coming together online to create a special keepsake. Every memory left on the online obituary will be automatically included in this book.
View Tribute Book
Services for Jan Tollenaar
There are no events scheduled. You can still show your support by planting a tree in memory of Jan Tollenaar.
Plant a tree in memory of Jan

Share Your Memory of
Jan
Upload Your Memory View All Memories
Be the first to upload a memory!
Share A Memory
Plant a Tree