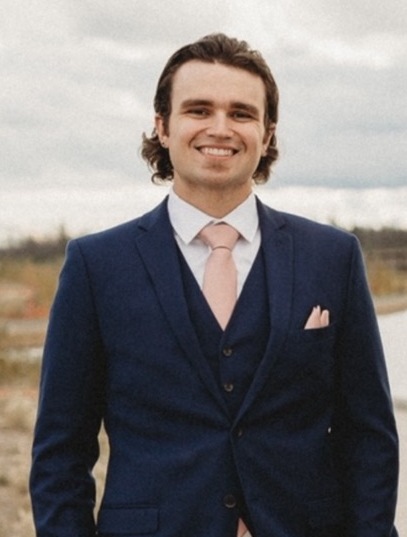 Please share a memory of Brandon to include in a keepsake book for family and friends.
View Tribute Book
We regretfully announce the tragic passing of Brandon Isacc Irving Nelson on July 7, 2022, after an accident at the Suncor Base Plant site. Brandon was born to Kevin and Terrilee Nelson on July 2, 1996, in Fort McMurray, Alberta. An independent and vibrant personality from the beginning, Brandon was an excellent student and athlete. Brandon graduated from high school in 2014 and immediately went on to complete his trade as a Heavy Duty Mechanic. After getting his Red Seal tickets in 2017, Brandon began a career as a Journeyman Mechanic culminating in his 4 year career with the field services division of Komatsu Canada. Brandon went on his first date with Charissa on June 5th, 2018. Brandon proposed to Charissa in Banff on July 11, 2020, and they married on August 15, 2020. They spent their days travelling, enjoying the outdoors, and getting together with friends and family. Brandon and Charissa were deeply devoted to each other; he called her his Angel. Brandon is survived by his wife Charissa Nelson, Parents Kevin and Terrilee Nelson, Brother Ryley Nelson, Grandfather Ronald Baker, In-laws Peter and Vicky Anger, Brother-in-law Andrew Anger. He was predeceased by his Grandmother Frances Baker and Grandparents Irving and Margaret Nelson. Please join us Monday, July 18th in celebrating Brandon's life from 2pm-5pm at Doug Barnes Cabin. Later that evening, we will be toasting our final farewells. Cheers and beers at East Village Pub from 8pm until close.
Monday
18
July

Share Your Memory of
Brandon
Upload Your Memory View All Memories
Be the first to upload a memory!
Share A Memory
Plant a Tree